CP is proud to announce the completion of the solar energy farm installation at its Calgary headquarters. The project is one of the largest private solar farms in Alberta and is expected to generate more power than consumed annually by the main headquarters building.

“This project is a testament to the ongoing commitment CP has made to reduce the environmental footprint of our business operations,” said Clements. “Sustainable business practices are important in our fight against climate change and should take into consideration the ability to meet our needs, without jeopardizing the future of generations to come.”

Construction of the solar farm began in October 2020 with utilities being placed into the ground before winter weather settled in. The completed installation spans approximately five hectares and provides covered parking for up to 500 employee vehicles. Four electric car-charging stations with the ability to fully charge most electrical cars in up to five hours were also added to provide employees with quick and efficient access.

“We are excited about how this project positions CP as a sustainably driven company,” said Glen Wilson, Managing Director Environmental Risk, Regulatory and Environment. “CP is being increasingly recognized globally for its sustainability practices and the conversion of our headquarters building to solar power is a very strong and visible indication of our commitment to climate action." 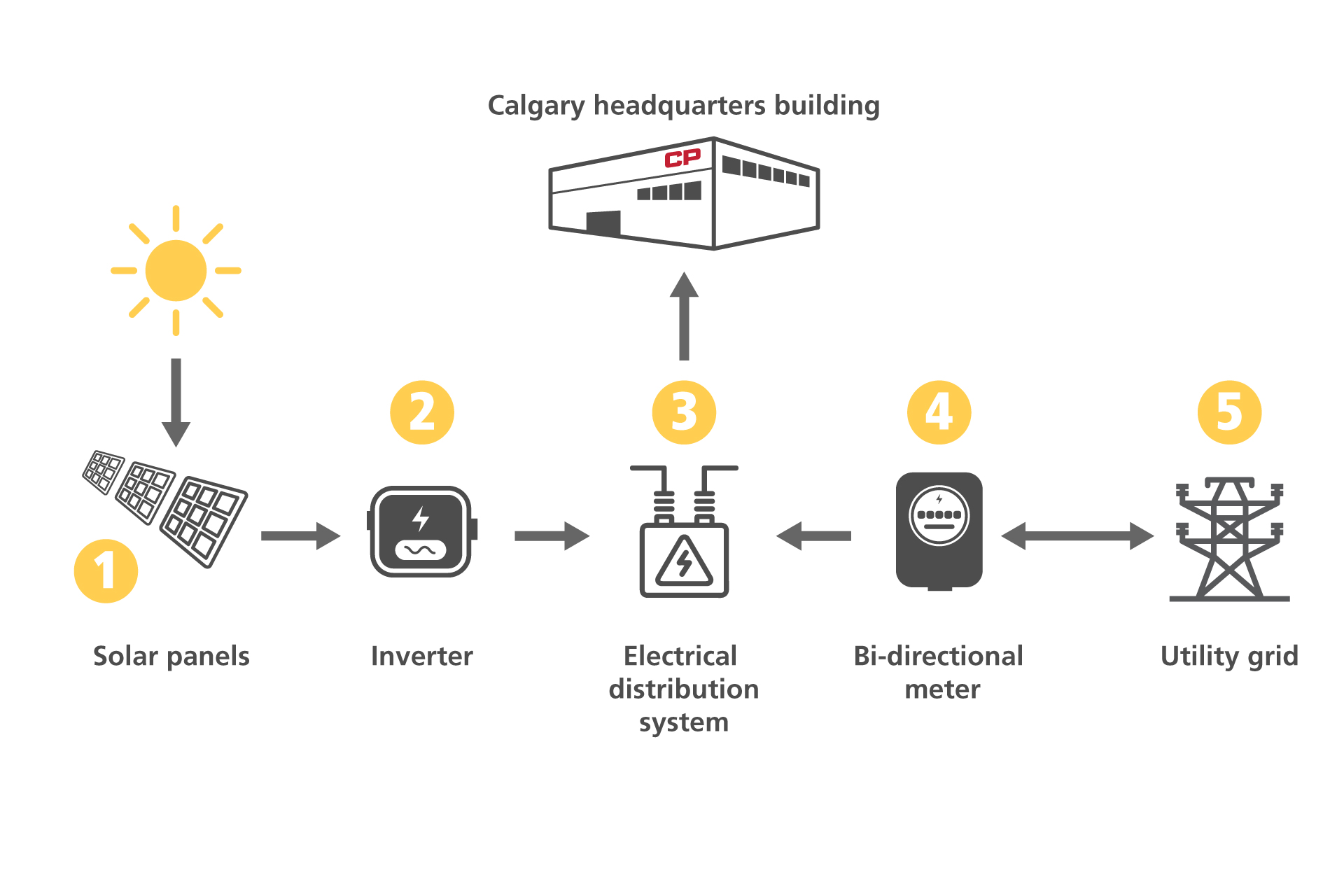 How it works: (1) Solar panels installed at CP’s Calgary headquarters. These photovoltaic cells convert sunlight into direct current power. (2) Inverters are used to convert direct current power from the solar farm to alternating current. (3) The inverters feed electricity into CP’s electrical distribution system, which powers the main headquarters building. (4) The bi-directional meter keeps track of energy imported from the grid. (5) The campus remains connected to the utility grid.

CP is named to CDP’s A List for the second consecutive year.

CP is proud to have been named to the Canada’s Top 100 Employers list, which annually recognizes industry leading employers offering an exceptional workplace for employees.

CP is honoured to recognize 59 shippers with its annual Safe Shipper Award for safely transporting hazardous materials by rail in 2021.

Canadian Pacific is proud to become the first freight rail company in North America to participate in the United Nations Global Compact, joining thousands of other companies around the world that are committed to sustainable and responsible business actions.

CP recognized as one of ‘Canada's Best 50 Corporate Citizens’

CP is proud to be recognized as the top performing freight transportation company on Corporate Knights’ 2022 ‘Best 50 Corporate Citizens in Canada’ annual ranking.

CP shares its long-term vision for sustainability in the newest installment of the Vision 2045 documentary film series.

CP is proud to announce that, for the first time, it has been included on the Corporate Knights Global 100 Index, an annual ranking of the most sustainable corporations in the world. CP ranked 34th overall on the 2022 index and was the top performing freight transportation company evaluated globally.

CP Scores an A on 2021 CDP Climate Change Disclosure Reporting

CP is proud to be recognized by CDP for leadership on climate action and transparent reporting with an A rating on its 2021 climate change disclosure.

CP has been recognized for continued sustainability leadership on the S&P Global Corporate Sustainability Assessment and added to the Dow Jones Sustainability North America Index in 2021 for the second consecutive year.

On September 30, 2021, CP proudly placed into service the “Every Child Matters” orange locomotive to commemorate the victims and honour the survivors of residential schools in Canada. The locomotive will raise awareness as it operates across CP’s network for all of us who see it to continue on the path of learning about Indigenous Peoples and their rich history and culture.

CP has joined the Nature Conservancy of Canada in support of the Jim Prentice Wildlife Corridor Legacy Project, conserving a critical wildlife corridor through the Crowsnest Pass.

In June of 2020, CP completed construction of a capacity expansion project located along the south shore of the Burrard Inlet. The expansion project is critical to CP's long-term growth strategy supporting the Vancouver Terminal and CP's west coast operations.

Inspired by our own front-line workers, CP donated $1 million to four North American charities working on the front lines to help people impacted by COVID-19.

CP and Heart & Stroke have teamed up since 2014 to save lives and improve people’s health across the country. In 2020, CP committed an additional $1.5 million in funding over the next three years to support cardiovascular research that will prevent disease, save lives and promote recovery.

In November 2020, seven CP teams participated in the fourth annual Spin for a Veteran event. To date, CP has helped raise more than $1.2 million for the Homes for Heroes Foundation, which has contributed to building 12 homes for veterans since 2016.

Since the program’s inception, the CP Holiday Train program has contributed 4.8 million pounds of food donations and more than $19 million in corporate donations to more than 200 food banks in Canada and the U.S.

On Remembrance Day in Canada and on Veterans Day in the U.S. in 2019, CP unveiled five specially painted locomotives to honour the culture and history of the Armed Forces.

In response to ongoing social unrest and social injustice across the U.S. in 2020, CP donated US$1 million to three U.S. charities to support the people of Minneapolis, home to the headquarters of CP's U.S. operations, as well as to support meaningful positive change nationally.

On June 7, 2021, CP proudly raised the Pride Flag to kick-off Pride Month across our network.

Our continued commitment to diversity and inclusion

Since publishing our first commitment to diversity and inclusion, we re-doubled our efforts to collaborate with employees, communities along our network, and partner organizations to progress and support our commitment toward a more representative and inclusive workplace.

CP’s Procurement team has assessed a variety of ways to divert one or our largest waste streams, scrap railway ties, and recently, CP has partnered with Cielo Waste Solutions Corp. to evaluate the use of railway ties as feedstock at a renewable fuel refinery in development in Dunmore, Alta.

In 2021, CP implemented the use of ESSO Diesel EfficientTM fuel for its locomotive fleet in Canada.

In October 2020, CP leaders engaged with key customers virtually to present a progress update on our customer experience strategy through our Customer Advisory Panel.

CP was awarded the 2020 Railway Association of Canada Safety Award for the development of a wheel-forecasting model detection system for railcars and locomotives.

In late 2020, CP deployed its new broken rail detection technology to enhance rail safety and efficiency in unsignalled territory, a section of track not controlled by signals, which accounts for approximately 40 percent of CP’s network.

In the fall of 2020, CP announced a partnership with Maersk Canada to build and operate a world-class transload and distribution facility in Vancouver, expanding on CP’s existing Vancouver Intermodal Facility.

After the COVID-19 pandemic emerged in early 2020, we established the Pandemic Response Team, responsible for developing a comprehensive pandemic planning framework and corresponding contingency action plans.

CP continues to reduce frequency of injuries in 2020

The project is one of the largest private solar farms in Alberta, and is expected to generate more power than consumed annually by the main headquarters building.

Isabelle Courville to Chair CP's Board of Directors

Congenital heart defects affect one in 80 children in Canada every year and there is currently no treatment to permanently repair the heart.

CP’s goals for Kids Program donates more than $75,000 to charity

CP is dedicated to raising awareness about heart-healthy living through our community investment platform, CP Has Heart.

In April 2018, CP sponsored and participated in the week-long Atamiskākēwak Gathering in Moose Jaw, Sask.

In September 2019, CP hosted the inaugural Safety Awards for Excellence Gala at the RCP Pavilion at E.H.H. Campus in Calgary.

Utilizing the results of CP’s 2017 Employee Engagement survey, CP recognized the need to coach our emerging leaders to help them engage our new employees.

Spin for a Veteran

In June 2019, the Homes for Heroes Foundation and CP held their third annual Spin for a Veteran event, which raised more than $530,000.

In 2017, CP and the Unifor National Employment Equity and Human Rights Committee conducted an internal review to identify gaps and challenges to hiring Indigenous individuals for railcar mechanical positions.

In June 2018, CP suppliers and employees enjoyed a round of golf at the Elbow Springs Golf Club in Calgary where, with the support of numerous donations, they raised $100,000 for Heart Beats Children’s Society of Calgary.

Introduced in 2017, CP FastPass is an industry-leading mobile app that helps reduce truck density and wait times at intermodal terminals across North America.

In late 2018, CP introduced the next generation of grain transportation.

To mitigate safety risks and disruptions associated with railcar roller bearing failures, railways use wayside detectors to collect data about the condition of bearings (including temperature and vibration) on passing trains.

To support steelhead trout populations, including rearing and spawning, CP began a habitat enhancement project along 100 metres of the Bonaparte River in British Columbia in 2017.

During CP’s long history, there were times we needed to draw water from strategically located wells to service steam locomotives and water livestock in transit.

CP safety culture recognized by the Railway Association of Canada

In August 2018, the Railway Association of Canada recognized CP’s commitment to safety at its annual 2018 Safety Awards.

In June 2019, CP officially renamed Hobbema train station located in central Alberta to Maskwacis, in acknowledgement of the true heritage of the land and the tribes who originated on Treaty 6 territory.

Triumph on
the Turkey
River in Iowa

After severe flooding along Iowa's Turkey River in March 2019, damage to a rail bridge resulted in 400 feet of CP main line track falling into the river. In a remarkable 12 days, CP's Operations team replaced and elevated the missing bridge
and track.